Working for an Aerospace company in the ‘80s, the dress code was much more formal than it is today.  Women wore pant or dress suits and men rarely showed up for work without a tie.  While engineers at times dressed less formally, particularly those who stayed in the computer labs or on the engineering floors, they still wore khakis and sport shirts and their managers were always in suits and ties.  And everyone showed up for meetings with the customer in business attire.

I was lucky enough during the early ‘80s to have a prime job managing the company’s technology software department which included Research & Development projects in interesting software areas such as Artificial Intelligence, Computer Aided Software Design, and Software Security.  A group of very knowledgeable PhDs worked on the Trusted Software Security project.  They had been working with the government and with Sun Microsystems for several years, pushing the envelope on secure software and had been awarded steady R&D contracts for several years in a row.  The PhDs were well-known in the security circles, often asked to gave briefings at software security conferences.

At a couple of conferences in a row, they’d encountered a young software engineer who they were very impressed with but who lacked the educational credentials to typically be hired into such a the team.  But they were all so excited by this young man’s abilities that they convinced me to hire him as their assistant with the thought that they’d over time convince him to return to obtain his PhD.

So Mark, our new Asian security engineer, started working for the team.  He arrived at work wearing the T-Shirts and jeans he’d worn on campus at UC Berkeley.  On one of the first days he was on-board, I spotted Mark at the other end of the aisle of cubicles as I walked towards my office.  But it wasn’t his T-Shirt and jeans that caught my attention,  it was his shock of bright orange hair.   I veered into his supervisor’s office.

Chagrined Dave said “Yes, orange.  I already talked to him about it but there’s no customers in today so I just told him to wash it out tonight.”

“Humm,” I muttered and went to my office.

I didn’t think much else about it since the next day Mark showed up with his normal, although somewhat long, black hair.  And the team’s research was going very well.  They were working hard, long hours but were making great progress.  Then came the day for the big customer review.  An important day to determine how much R&D funding would be awarded for the next year for the project.

The team had decided to have Mark give the demo – he was quicker at the keyboard and the demo flowed very well when he gave it.  I said they’d need to be sure he was dressed appropriately and they said they’d already spoken to him about it and one PhD had given him a tie to wear and Mark had described an appropriate shirt already in his closet.

The day of the demo I arrived at work and, walking to my office, spotted Mark out of the corner of my eye and marched directly into Dave’s office.   Dave didn’t even dare look at me.

Yes indeed – Mark not only was wearing his normal T-Shirt and jeans, today his hair was shocking purple.  Bright purple.  But it was too late for anyone else to learn the demo.  And the Customers, Army Intelligence Officers, had already arrived and were waiting in the conference room.  So nothing to do now but wait for the reports of how it went.

Later in the afternoon the head security PhD came into my office beaming.

“The customers certainly looked shocked when he entered the room.  But once Mark started in on the demo they forgot all about it.  He was so knowledgeable and answered all their questions with ease.   I’m sure we’ll get our funding next year.”

“But you’d talked to him about his clothes and hair – why did he show up that way?” I said, still concerned that he may just be rebellious which would eventually cause issues.

Mark had told them that he’d gotten up that morning and put the shirt and tie on, looked in the mirror and felt so out of place and nervous he didn’t think he would be able to give the demo or face the customers.  He panicked.  He was so ill at ease in the uncomfortable clothes.  And whenever he dyed his hair, he felt his shocking hair diverted attention which made him feel comfortable and at ease.  He was so worried about not doing a good job that decided he had to show up looking the only way he felt confident. And it hadn’t hurt the project. The R&D funding was awarded.

The security project was expanding and we’d hired a woman PhD from the East Coast.  She came to start work while her husband and two teenage sons remained back East to wrap up the sale of the house, packing and moving.  One afternoon after a week at work she came into my office looking very upset.  She told me she had just gotten a call from her oldest son and that her husband had had a heart attack and died.  She was worried that she didn’t have any vacation and had just started work.  I assured her that she didn’t need to worry about that.  To go back East and take all the time she needed – that her job would be waiting for her.  I asked her if she needed anything from us and she said she wondered if she could use her office phone to make plane reservations (since at that time calls outside the building were not allowed) but of course, anything she needed.

I stopped by her cubicle during the afternoon and she said that the airlines were very sympathetic and working with her and that she said she’d gotten a flight for that evening.  Mark was in her cubicle helping her – he’d asked Dave if he could make sure she had a flight.  The next day I learned more.  Mark had insisted on driving her home, worrying that she may be too upset to drive safely.  He had cooked her dinner, helped her pack and driven her to the airport.  I then realized he’d jumped in and done more for her than anyone else at the company had – he had shown real compassion while I had been judging him on the color of his hair and clothes he wore.  And I said to Dave, “Tell Mark he can show up with any color hair he wants.”

Prejudice against purple hair seems like such a small thing but most of us have many prejudices.  Growing up in Utah, I had been prejudiced against blacks without knowing it.  I recognized my prejudices in college and worked hard to overcome them.  One day shortly after I started as a software engineer at Ford Aerospace, I was talking to someone about three Philco computer engineers I met and someone asked me “You mean Emery, the black engineer?”  I had to stop and think because I wasn’t sure any of them was black.  The next day I looked more closely and sure enough, Emery was black.  I was so proud of myself that I hadn’t even noticed.  Now Mark had taught me to also not judge by the color of one’s hair.

When Barack Obama was born, many states considered his parent’s marriage, marriage between a black and a white, illegal.  When we lived in Charlotte, North Carolina in 1978, our company’s black engineer and his blond wife would be yelled at as they walked together down the street or worse – bottles were sometimes thrown at them from passing cars.  They eventually had to move to Colorado where the prejudices weren’t so strong.

Jumping to November 4, 2008.  Such a wonderful day – where America showed that we have all gotten over so many prejudices during the years.   A day of change, a day where racial prejudices have been set aside,  at least in one of the most important arenas, the Office of the President of the United States.  Yet on the same day California, the most progressive state in the union, voted “Yes” on Prop. 8 to add discrimination to the state constitution against gay marriages.  How ironic that we take one huge step towards acceptance and equality and one huge step backwards.

Hopefully it won’t be too many years before we can mature to also accept gays and lesbians and their desire to be married and accepted into the mainstream.

Afterword November 2014: It’s a good thing I got over my aversion to purple hair. Freeman on his way to Burning Man: 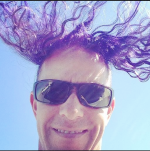